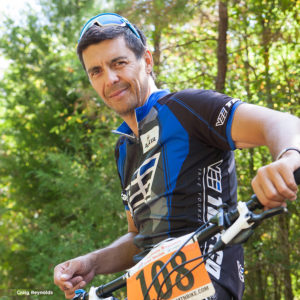 Starting his competitive cycling career at a young age, Mike quickly rose to the top of the BMX racing ranks with multiple National and World Championship titles. He defended those titles again years later. Mike switched to the ultra-competitive Mountain Bike racing category and found success early on in the larger wheeled discipline. Downhill World Champion and national titles in Dual Slalom were among his accomplishments in the gravity-focused cycling category. Mike is one of but a small handful of Americans to win a UCI World Cup in three different forms of cycling. He now directs the newest and most respected BMX facility in Rock Hill, South Carolina.

“With over 30 years of cycling experience, I used to depend on caffeine filled gels and drinks that only gave me a swift surge of energy.  Now with XRCEL, I can extend and maintain my energy levels much longer and recover quicker during training rides and competitions.  In my endless pursuit to stay physically fit, and sustain quality training efforts, I feel it’s my obligation to share this product with those who want to achieve success and improve performance on any type of bike. After weeks of testing the product, XRCEL proved I could sustain my energy and intensity levels over and beyond three hours as a sprinter. I was blown away by the results. XRCEL is a big game changer for me”, said Mike King.

“Mike King has had tremendous success in the world of cycling and we are thrilled to have him on board as a Brand Ambassador for XRCEL. As a World Champion professional cyclist, Mike knows what it takes to train and compete at the highest levels and how important proper fueling is for optimal performance. Mike introduced XRCEL into his rigorous training schedule, then moved on to use it during competitions, his results and decision to switch to XRCEL as his primary fuel, helps reinforce our message to athletes that XRCEL brings the qualities they are looking for in a nutritional supplement.” states Fred Sexton, President and Founder of New World Consumer Products. “ We are looking forward to Mike making a big impact for the XRCEL brand.”

XRCEL Athlete Fuel is a revolutionary extended release carbohydrate supplement formulated with patented pH and temperature responsive micro-gel technology developed by New World Pharmaceuticals, LLC.  XRCEL is a caffeine and banned substance free supplement designed to provide athletes with extended release muscle and brain fuel so that they may get the most out of their training and competitions. To learn more about XRCEL please visit the website at https://xrcel.com

New World Consumer Products is bringing the science of human nutrition and carbohydrate metabolism to high performance athletes with an emerging portfolio of patented products and technologies. Our flagship product, XRCEL ®, is a scientifically advanced sports performance fuel based on patented formulation technology developed by New World Pharmaceuticals, LLC.