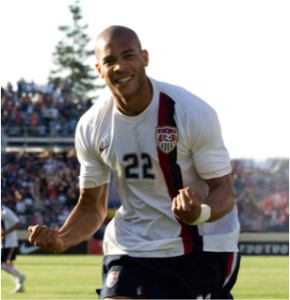 “I feel as though it is my responsibility to relay to individuals the importance of following their dreams and not accepting defeat, and pushing past adversity. I am very excited about partnering with New World Consumer Products and especially XRCEL, as I know that they embody all the characteristics I so strongly believe in. XRCEL has allowed me to permanently refrain from using caffeinated energy drinks which I have depended upon throughout my career to maintain energy levels, all the while providing me with more than enough fuel/energy to fly through my trainings and games!”

“Having Oguchi choose to join our XRCEL team is truly exciting! I am looking forward to having the opportunity to work with a world-class athlete and fellow Clemson alum, whose character is just as highly respected as his game. ,” states John Wilson, Manager Business Development for XRCEL.

“We are thrilled to have Oguchi join our team, said Fred Sexton, President and Founder of New World Consumer Products. Oguchi represents the type of athlete ambassador our brand stands for. He is tough, smart, and well respected in the international soccer community. Of course it’s also great that he loves XRCEL and the advantages it gives him on the field.”

Oguchi began his freshman season at Clemson University in 2000. In his tenure, he pioneered the Clemson defense to be the first and only team in the ACC conference history to win the ACC Championship on home ground. While at Clemson, Oguchi excelled academically as well as athletically, and was recognized in 2 seasons at Clemson as one of the most dominant college defenders to play in recent history. In the summer of 2002 he began his professional career in France at FC Metz. He later went onto play for Liege in Belgium. In 2009, Oguchi became the first American to sign for AC Milan and was signed to a 4-year contract, with the Italian Team. Owing to a knee injury, this time was cut short and Oguchi went onto join Dutch Eredivisise Champions Twente in 2011. On August 2012, following a positive season with Sporting Lisbon, Oguchi Onyewu signed with Malaga CF on a season-long loan. From Malaga, Oguchi went onto Queens Park Rangers he later joined Sheffield Wednesday in January 2014. Oguchi is currently playing for Charlton Athletic as a center back, contracted until June 2015.

Oguchi has always been passionate about health and fitness and has always maintained a very professional lifestyle. Oguchi has been a member of the US Men’s National Soccer team since 2003 and Headlined in two FIFA World Cups, in 2006 and 2010, while collecting 70 national team caps.

XRCEL Athlete Fuel is a revolutionary extended release carbohydrate supplement formulated with patented pH and temperature responsive micro-gel technology developed by New World Pharmaceuticals, LLC. XRCEL is a caffeine and banned substance free supplement designed to provide athletes with extended release muscle and brain fuel so that they may get the most out of their training and competitions.

New World Consumer Products is bringing the science of human nutrition and carbohydrate metabolism to high performance athletes with an emerging portfolio of patented products and technologies.
Our flagship product, XRCEL ®, is a scientifically advanced sports performance fuel based on patented formulation technology developed by New World Pharmaceuticals, LLC.