Posted at 13:03h in Science by Team XRCEL 0 Comments
0 Likes
Share on FacebookShare on TwitterShare on Pinterest 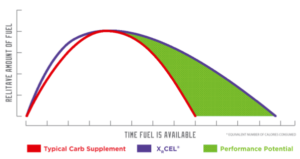 Athletes need carbohydrates before, during and after performance for fuel and glycogen replenishment. An athlete’s body looks first to carbohydrates as the primary source of fuel; followed by fats and then protein. Muscles use glucose, glycogen and fatty acids for energy. When muscles are at rest, the predominant form of energy utilized is free fatty acids. With increasing intensity of exercise, the type of energy source utilization changes. At low-intensity sub-maximal exercise, muscles primarily use blood glucose and free fatty acids as energy sources. As the intensity of the exercise increases, more energy is derived from glycogen and glucose, with glycogen becoming the primary energy source.

Until XRCEL® was invented, athletes had to use conventional drinks and gels, that rely on multiple types of sugars, to try to increase the amount of carbohydrates their bodies could absorb. This is because the carbohydrate “gateways” become saturated and any additional available carbohydrate that might get through the “gateways” passes by, and the potential to be absorbed is drastically reduced. 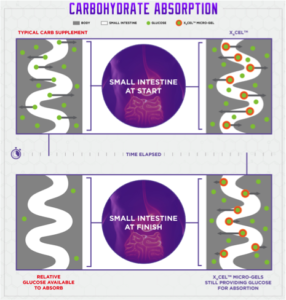 XRCEL® overcomes these limitations with its extended release micro-gel technology. XRCEL®’s patented pH and temperature responsive micro gel formulation is designed specifically to aid in increasing the amount of carbohydrate being absorbed. The glucose loaded micro-gels in XRCEL® are specially formulated to stay near the “gateways” in your small intestine. Staying close to the “gateways” for an extended amount of time allows the gateways to take in more carbohydrate, helping to increase the amount of carbohydrate absorbed per calorie consumed (when compared to conventional sports drinks and carbohydrate supplements). This is what makes XRCEL® different than any other product on the market. The increased circulating levels of glucose are thereby more readily converted to ATP thus providing increased muscle output capacity and improved brain function (concentration & focus in this setting). The remainder, stored as glycogen, is reserved for future use.

A better skilled team or athlete can often times lose to a less talented competitor simply because they didn’t have the energy to keep up. At XRCEL® we can’t take credit for the skills, but we can significantly help improve the fueling.